What are fibroids?
Fibroids, also known as leiomyomas, are benign smooth muscle tumors that occur in the uterus. They grow under the influence of estrogen and progesterone, and are thus seen in the reproductive years. By the age of 40, 40% of women have fibroids. African-American women may be prone to get symptomatic fibroids in their 20’s. With menopause and the decrease in hormones, fibroids also decrease in size. The most common symptom from fibroids is abnormal bleeding. When fibroids grow, it can also cause pressure symptoms on the bladder, rectum or pelvis. There may be a genetic predisposition to having fibroids and multiple fibroids.

Can an ovarian cyst be normal?
During a woman’s menstrual cycle, ovarian cyst formation is normal. These cysts are part of developing an egg to ovulate or to make hormones to support a potential early pregnancy, and are called functional cysts. These type of cysts should disappear with each cycle. I get worried that a cyst is abnormal if it persists for more than 2 cycles, if it is larger than 5 cm, or if it has unusual features such as a septum or solid elements. Sometimes a functional cyst can cause severe pain and internal bleeding if it should rupture internally. This is usually an emergent situation that requires immediate evaluation. 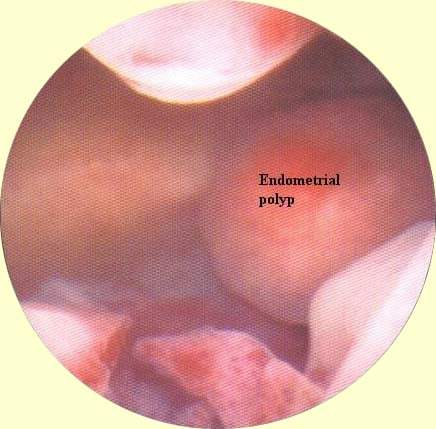 hysteroscopic view of polyps            Is there a screening test for ovarian cancer?
To qualify as a screening test, the test has to be sensitive enough to pick up the disease in its early stages. It has to be specific, so other conditions do not trigger the test to be positive. It has to be cost efficient, so that trying to find the disease does not cost more than the treatment of the disease. Unfortunately, no such test is available for ovarian cancer currently. CA-125, an ovarian cancer antigen, was thought to be a possible screening tool. CA-125 is elevated in women with a known ovarian cancer, and is used to monitor progression or regression of the tumor. It is not sensitive enough to pick up ovarian cancer at Stage I disease, and can be positive in non-cancerous conditions like endometriosis, pelvic inflammatory disease, and fibroids.

Is it possible to have a polyp in the uterus?
Polyps can form where there is glandular tissue, i.e. in the colon, nose or uterus. Endometrial polyps occur in the uterus and patients will have the symptom of heavy menstrual periods. These polyps can be resected with a simple procedure called hysteroscopy. With a small telescope inserted through the cervix and into the uterus, the polyp can be directly visualized and removed.

Is there an ovarian tumor with hair and teeth?
Dermoid cysts, also known as mature cystic teratomas, are the commonest ovarian tumor. They occur primarily in the reproductive years, but can also occur in children. The tumor has all three germ layers that are seen in the body - ectoderm, mesoderm and endoderm. As such, the tumor has fat, hair and teeth in it. Teratomas sometimes can be very organized and appear to form fetal-like tissues. Dermoids are bilateral 15-20 percent of the time. Treatment is surgical removal prior to torsion or rupture.